My Pilgrimage on the Ireland Way 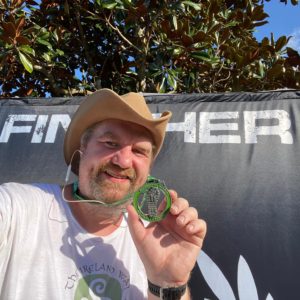 More From This Author
In June, BTSADV's own volunteer, Rick Dougherty, will be flying across the world to walk 1,000 km (620 mi) pilgrimage along The Ireland Way to raise money and awareness for domestic violence. As a survivor of abuse and of Irish decent, this trip of a lifetime is dear to his heart for many reasons. Read more about his incredible journey ahead in this blog.

Here at Break the Silence Against Domestic Violence, our main objective is to shine a light on domestic violence.  We want to let victims know that they are not alone, and more importantly that there is a proven path to moving from victim to survivor.  The simple act of sharing our stories can provide others with the needed to push to escape an abusive relationship, or even make it through another day after leaving.

When I decided that I was going to finally cross a big item off of my bucket list, I knew I didn’t just want this endeavor to be for my own personal spiritual, emotional, and physical growth.  I wanted to raise money and awareness of the cause that has been so close to my heart for my entire adult life.

In June, I will be starting a 1,000 km (620 mi) pilgrimage along The Ireland Way.  This path travels from a small fishing village in the south-west corner of Ireland, and doesn’t end until Ballycastle in Northern Ireland.  It is a journey that usually takes hikers approximately forty days, but I will be allowing myself a little more time to complete the task.

The location was an easy choice for me.  Growing up with an abusive father, I naturally created a closer bond with my mother’s side of the family.  If there was one characteristic of my mother’s side of the family, it was a strong attachment to our Irish heritage.  This was particularly the case for my grandfather, Pop.  Born on a farm in Lancaster County, Pennsylvania, my grandfather served in World War II (although not in a combat role, because the military could tell he did not have the violent streak needed to be able to kill another human being), and went on to work extremely hard at the biggest factory in the area when he returned from Europe.  He had five daughters.  He was the perfect example of positive masculinity with his work ethic (especially when it came to keeping a well-trimmed lawn and pristinely-washed car), while showing none of the toxic traits I saw in my father.  My grandfather passed away over a decade ago, but I could think of no better way to honor the positive example he set for me than to walk the length of the country he loved so much.

As a child, Irish and Irish-American culture was ubiquitous in every aspect of my life.  When my grandparents would talk about living through the Great Depression or World War II, they would talk about “President Roosevelt.”  When they talked about the 60s, they would talk about “Jack.”  President Kennedy represented one of their own making it to the pinnacle of American society, and that made them view him almost as family.  Fall Saturdays were meant exclusively for Notre Dame Fighting Irish football.  There were Irish proverbs in frames on the walls throughout my grandparents’ house.

I knew that my first visit to Ireland couldn’t be a simple sight-seeing tour.  I wanted to find a way to experience things I wouldn’t normally see.  While I am sure that Dublin is a beautiful city, it isn’t where any of my ancestors lived before emigrating.  My pilgrimage will put me in places that don’t appear in the brochures.  The countryside will provide me with a much-needed break from the hustle-and-bustle of society here in the United States.

In 2020, I started taking part in smaller pilgrimages through a group called Modern Catholic Pilgrim.  While religion has been the driving force for these travels for centuries, in recent decades there has been a major increase in the number of secular visitors to these trails.  The spiritual aspect will be an inner-motivation for why I am trying to tackle this particular challenge, but domestic violence awareness is my sole motivation that I want to stress to the outside world.  At no point during this process will I be trying to force my religion on anybody else.  None of the money raised will be going to any religious organization.

My walks with Modern Catholic Pilgrim have been spiritual in ways that have very little to do with religion.  My first pilgrimage was more than forty miles on the Pinellas Trail in the Tampa Bay area of Florida.  I made the journey over the course of two days, because I happened to live nearly at the half-way point of the trail.  This was very early into the pandemic.  I was out of work, and stuck inside for hours at a time.  Many survivors get triggered by situations that are completely out of their control.  Since abusers focus on having control of their victims, this is understandable.  There was never a point when I had less control than at the beginning of the pandemic.

It was amazing what that pilgrimage did for me.  Putting myself through a physically and mentally strenuous task was just what I needed at the time.  Being alone with my own thoughts allowed me to process how the uncertainty of world events reminded me of the uncertainty of growing up in an abusive household.  Most importantly, when my feet were so sore that I didn’t know if I could take another step, I always took another step.  Fighting through the physical pain was such a metaphor for struggling through what I endured as a child.

You are going to have the opportunity to join me…at least symbolically…on this journey over the next few months.  Break the Silence Against Domestic Violence will be sharing videos, social media posts, and of course blogs about my progress.  With each step, I will be thinking about survivors.  When I struggle on hard days, I will be thinking of all of the victims who are struggling through the darkest days of their situations.  When I experience the jubilation of completing this task, I will be thinking of all of those survivors who accomplished huge things in their lives after escaping abuse.  A 620-mile walk is so similar to going to school; getting that promotion at work; or just finding healthier physical and mental practices after abuse.  These are goals that seem so lofty at first, but can only be achieved by taking one small step at a time.

Even the times I am not pushing myself will remind me of survivors.  Sitting down, and taking a load off of my feet after a twenty-mile day overwhelms the body with an almost euphoric sense of relief and calm.  This is like that first exhale of a survivor when she can sleep a night without worrying about a drunken rage.  You will already be with me on this trek, but we are going to be sharing even more ways that you can be a part of this.

Of course, no pilgrimage starts on the trail.  It starts at the bank; in the gym; and on the computer.  Money, research, strength, and support are all needed to even begin to take on such a herculean task.  From the team here at Break the Silence Against Domestic Violence to my incredible wife Courtney to my mother to my friends to all of my employers, I have a tremendous support system.  My aunt and my friend Danielle, both gave me gift cards to REI to help me with the price of gear.  My mother has made a lot of phone calls while I was at work to take a lot of the weight off of my shoulders.  Courtney has had to make financial sacrifices so that I could set aside the money needed.

Setting aside that money has been an incredible adventure.  I have done everything from working as many as seven jobs at the same time (that is not a misprint), to collecting soda cans to recycle for money.  Because of all these efforts, in less than two years, I have been able to put together all of the money I will need for plane tickets, gear, hotels, food, and other considerations.  Now, all of the money I raise can go directly to Break the Silence Against Domestic Violence.

Leading up to my travels, I have a number of training barometers on the horizon.  On April 3rd, I will be running the Tower of Terror 10-Miler at part of runDisney’s Springtime Surprise events at Walt Disney World.  My good friend Marisa, who happened to be the first person to donate to my link will be running with me.  Later that month, I will be heading back to Central Pennsylvania for a concert.  While I am there, I have some training exercises planned; including a hike with my friend Matt who was the best man at my wedding.  On April 24th, I will be taking part in my second MammothMarch event this year.  It will be another twenty-mile hike that must be completed in less than eight hours.  Back in February, I completed another hike with this company in Fort Christmas, Florida.

All of those events are just the start of what we have planned.  As you can tell by the lofty goal of 620-miles, I am not someone who is easily satisfied with accomplishments.  I want to raise a lot of money for Break the Silence Against Domestic Violence, and I want to create a strong sense of community around this hike.  If I survived what I have already survived, and you have all survived what you have survived, there is nothing that we can’t accomplish.

Come walk with me.